Life in the past few months....has been very busy. So busy, that I didn't even find time to blog about some incidents, which I wanted to. Well, I know some eyebrows will be raised, when I said I was busy. Well, my friend, 'busy' doesn't ONLY mean, that I am busy in office. I have a husband, in-laws and two kids, who are more than enough to keep me busy even when I am in home. And obviously enough, whatever I wanted to blog about was about them, and it was them who was keeping me busy enough not to let me write a blog when I wanted to....

So, here, I am penning down those thoughts, which I wanted to blog about, once upon a time...

- Smruthi gave the opening speech for her sports day in Nehru Stadium, for which, I had to prepare for her speech, more than her. On the D day, she absolutely refused to give the speech, and that is when me and Sri had to bribe her with white boards and markers, to make her speak successfully. And yes, she did talk very nicely. After all, kaakaikum....

- Immediately, the week after that, Swathi's school was celebrating Independence Day, and her madam kept changing her proposed costumes every day. After changing from Radha, to Barbie girl and finally deciding on a Rajasthani costume...she was supposed to appear like a rajasthani girl... The way her maa'm explained to me was "You need to dress her up like how Tabu looks in the "Sandhana thendralai..." song... and somehow, I managed to make her look like that, not exactly, but the best I can.

These school programs are more work for the parents, and if there was one thing, which I was not able to afford to my school-going kids, it is TIME. Very difficult. Inspite of that, I managed to give them my best and I was there with them when they performed. I am proud of myself for that. Hats off to me.

- Coming next, the frequent fights, between me and Sri, and the expected-but-never-came-romances. DOT.

- I finally, FINALLY managed to watch a Harry Potter movie in the theatres. History should not say that a die-hard HP fan, has not seen even a single HP movie in the theater. So, in order to make history, after desperate attempts, watched HP and the Deathly Hallows in PVR cinemas. And the most important point is, I was able to watch without hubby and kids' interruption. But, somehow, the movie did not impress me as much as the book did. I loved the books more!!! Anyways, history has been made.

- I was invited for a birthday party of a kid, by a mom, who was totally unknown to me. On attending her call, I was greeted as "Am I talking to Smruthi's mother?" That was the first time, I was addressed like that, and I liked it. She was the mother of Smruthi's classmate, another S. Seems like she always used to talk about Smruthi and few other girls, whenever she returned from school, and so this mother thought that her daughter would like it, if she invited my daughter for the party. And so, we attended her party, I had no clue of the people there, simply went for the cake-cutting , gifted the child and returned back home. When I asked Smruthi, if she enjoyed the party, weirdly enough, she replied that 'S' was not her friend, just a classmate. So, not a big deal!. This girl knows to differentiate between friends and classmates??? I was dumb-struck, as always!!!!

- Smruthi, of late has been asking me questions like, "When will I get married?", "When will you get me married?", "Who will act as the boy, when I get married?" "Only you have to dress me and comb my hair for my marriage as well" and stuff like that, to which I am totally clueless, as to what to answer and how to handle them. May be its the effect of seeing our marriage CD, during our anniversary week. What is the urgency dear! You don't know what you are asking for!

- Smruthi-Swathi fights are reaching an all time high...and there's no stopping either of them, once they get into the conflict mode. Such incidents always drain me of all the energy, and all I can think of at such times is, "when will these girls, grow up, get married and leave the house, so that I can be in peace?"

- Back to the romantic times between me and him, post the accident incident. DOT.

Another successful year. This year also, like always, we've had our own share of fights and romances, but of late, I can remember more of the fights than the romances. We have been fighting, okay...okay... I have been fighting more with you recently, but that will never stop me loving you. Kovam irukara idathula than gunam irukum (thank god, someone invented this dialogue.) But, today, I love you more than I loved you last year this day, and this will grow every year. Given another chance, I would prefer to sit next to you and keep arguing rather than go to some foreign country and hear romantic songs alone and miss you. Once, when I called you from onsite at 3 in the morning, and asked you if you really miss me or not, you replied that I will know once I come back and see you. And I knew that, once I saw you! I realised that you may not be good in expressing your feelings, but you still love me, as much as I love you. Thanks for making me realise that. 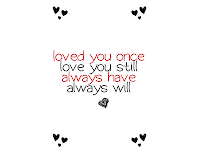